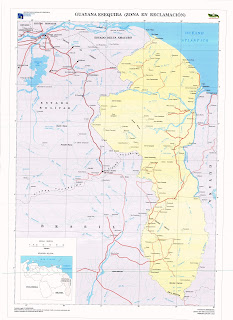 
I attach articles on the so-called "Kurupung project" which is being contemplated as a deal involving RUSAL and the Brazilians (possibly Electrobras) in Guyana. It entails a hydro project with a power station at Kurupung. Kurupung is just below the Pakaraima escarpment. You can see the view from the lowlands, looking at the escarpment, on p. 132 in my book. I understand that a lot of felling of forest has been taking place in the Kurupung area in recent years: there is a uranium mining company at work. In the 1950s there was a small village of pork knockers only.


What is not stated in these articles is that the lake for the hydro project would be in the upper Mazaruni basin. In other words, this is a revival of the upper Mazaruni hydro project of the 1970s and 80s, which was turned down by the World Bank and opposed by the Venezuelan Government of the time as contradicting the terms of the Treaty of Geneva, 1966 (whereby neither Venezuela nor Guyana was to carry out any development in 'Essequibo'which would advance the claim of one country against the other - and which provided a mechanism for settlement of the boundary via a UN Good Officer).


Survival International Document VI, 1978, published the details of the project under the title "The Damned". The plight of the Akawaio Indians of Guyana. The information in it was based on studies made by the Yugoslav firm' Energo Projekt. Then the Swedish consultants SWECO were called in. In their Report SWECO commented on the immensity of the reservoir area. The third, final phase would entail an area of c. 1,000 sq.miles (2,590 sq. km.) of inundation. When plotted on a map, this showed that all the villages and settlements in the upper Mazaruni would be under water with the possible exception of Chinowieng, on the Ayanganna plateau, to the south in the Chai-Chai area of the upper Mazaruni head which is scheduled to be dammed in the ultimate phases of the Amaila Falls hydro project (the Chai-Chai - Potaro Diversion)!
The site of the dam is Sand Landing (Latipu), 20 miles down river from Kamarang Mouth. The Yugoslav Report referred to a dam 226 ft. high. The catchment area would be 3,861 sq. miles (10,000 sq.km). Total output of energy, in the third phase was calculated as 3,500 MW.


Establishment of a New Town to house families of workers, personnel in general, schools, stores, etc. This was originally to be sited on a small flat area of grassland above Kumarow Fall,
a short distance up the Pakaraima escarpment. (See "Land" p.
132, which has a photograh of the Fall.)


A smelter producing 200,000 tonnes per annum would need 430 MW. So far Rusal is contemplating a bauxite smelter and refinery: Bosai wants 2 smelters and a refinery. The Brazilians want to puchase energy for the development of Boa Vista and Estado Roraima in general (and presumably would not want to build a Cotingo River dam if they can get their energy from Guyana). We can also surmise that if Brazil gets a deep water harbour on the Atlantic Coast, it will most likely be in the Essequibo Estuary and developments there will need energy.


One of the major criticisms of the upper Mazaruni Dam project of the 1970s was that there was no means of disposing of the surplus energy (and the Guri was then going strong). Being around the size of the Aswan Dam and there being well under a million people in Guyana, it was far too large. This objection has been overcome (and I would guess that the Kopinang bauxite deposit may be an important element in future increases in bauxite processing in Guyana.) It may be significant that Guyana has just appointed an Ambassador to China after a lapse of time - given the ambitions of Bosai in the Demerara.


Although the "Kurupung hydro project" may not be exactly the same as the "Upper Mazaruni hydro project" of the 70s there is every indication that they are basically the same project. Details so far seem to match (eg. the position of the power station and its energy output over 3 stages). We know that Rusal engineers have been in the upper Mazaruni surveying at Sand Landing.


Whereas previously an effort was made to bully the upper Mazaruni indigenous inhabitants to agree to the project, and to be prepared to evacuate their ancestral lands, this time so far, there is not even any mention of the thousands of people (Akawaio Kapong and Pemong) who would eventually become refugees. Nor is there any intimation of what the destruction of such a vast area of highland tropical forest will entail environmentally and climatically. Add to this the destruction of forest associated with the Amaila and the inevitable consequences which roads and tracks up the escarpment will bring to the Pakaraima Mountains at large.


As regards the Kapong people (Akawaio/Seregong and Patamona/Inkarigo): if bauxite mining displaces them in the south (upper Potaro basin) and they are flooded out in the north (upper Mazaruni basin), then maybe this would amount to ethnocide, a destruction of their society and culture, if not of the lives of what must now be some 15 - 20,000 indigenous people - to say nothing of the effects on their immediate kinsmen and neighbours on the Gran Sabana, Venezuela and in the Rio Branco, Brazil.

I would like to exchange links with your site laguayanaesequiba.blogspot.com
Is this possible?