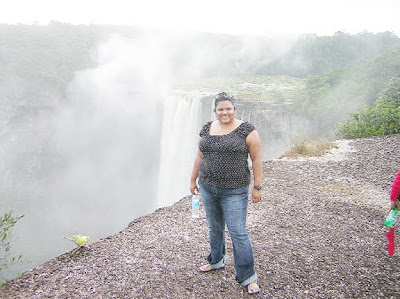 Alisha Ousman feels the tourism industry sat quietly by and allowed BK International to openly discuss tearing down Barakara Falls, “no one seemed to care,” she said. But she was prepared to fight the company even if it meant standing up alone.


Ousman had no idea how she was going to take on BK; a bit intimidated and uncertain of an approach she sat down one night and almost cried, she said. The issue had been in the press for two days and not a single phone call to the relevant authorities was returned, she recalled, and solidarity from other tour operators was “nothing but a pipe dream”.


Her company, Wonderland Tours depended on the income it pulled in from tours to Barakara Falls, which was included in its Mazaruni River tour package. She said the falls was more accessible than others in the country and an instant hit with tourists. But there was more, to lose Barakara meant letting go of a part of the environment which she had become attached to. According to Ousman, Barakara “just grew on me”.


Her description of the falls makes for good listening, particularly when she speaks of the trail and stumbling across the occasional snake or a getting wet in the rain on the way there. She said the natural beauty of the area humbles any visitor and that the falls has a soothing effect on the senses.


“Why anyone would want to destroy this place is beyond me. It is so beautiful which is a large part of the reason why I fought for it. We promote environmental protection here and that is what I believe I was doing, I don’t think people can look at this situation and call it anything different,” Ousman said in a recent interview with Stabroek News.


A few years ago the environment was not even on her mind. Alisha was in New York City having migrated after secondary school and the business which her father, Richard Ousman started in Guyana back in 1986, was not in her future plans. She worked as a bartender and later an event planner, “making good money,” she said. She spent seven years working in the city and growing up on her own; occasionally her dad visited but then he fell ill and the visits ceased.


Richard Ousman, a pioneer in the tourism industry here and widely respected, spent his last few days at home alone prior to Alisha’s return. One day something pushed her to leave New York and she just packed up and came back home without telling her father. She returned just in time to spend a short while with him. She picked up critical business tips from her father after agreeing to keep the family business going, but was unprepared for what was to come. He subsequently died.


Ousman said rumours started circulating after her father’s death which tied her to his tragic passing. She brushed them off and decided that people were not going to welcome her with open arms; she also decided that finding friends in the industry was going to be tough so she made no real attempts. Her focus was on keeping Wonderland Tours going and spent the last few years sustaining a business which she promised her father would continue “no matter what”. She said people actually wanted her to fail and she came close a few times, but pressed on and later she found a business partner in her husband, Mario. The two strategised a way forward for the business and worked on a plan to not only keep it afloat, but restore its prestigious ranking among local tour operators.


‘A thousand calls’
Business had picked up after an aggressive marketing campaign, Ousman said, but she was also candid in admitting that within the last year it slowed down dramatically owing to the global financial crisis. However, the Mazaruni tour package remained popular. “I made a thousand calls. I’m exaggerating a bit but it was many, and every single person ignored me. I didn’t know what to do then Gem [Madhoo-Nascimento] told me to talk to the press and I did. I did it with the hope that someone would read the story and speak out against what was happening,” Alisha said of the damage which was reported at Barakara Falls.


Her husband discovered the destruction at the falls after fielding a tour there on May 2 and the story went public on May 5. What he and many tourists had seen was a mud trail in the place of the old one and downgraded vegetation, the result of ongoing works by BK International in the area. For two days Alisha called around and came up empty. She quickly realized support was not easy to pick up and decided to confront Managing Director of BK International, Brian Tiwari.


BK International organised a media tour to the area after claiming responsibility for what happened and Ousman decided to show up on the tour. What happened after was widely reported; Ousman confronted Tiwari and the two had a very public disagreement over Barakara Falls. She told Stabroek News that Tiwari refused to grant her a private audience on the day in question and actually urged her to say whatever she had to say in the presence of the media. “I wanted to speak with him privately and he said no. I decided to speak with the media, I just poured my heart out,” she recalled.
On that day Ousman dismissed the announcement by BK International that it was going to develop the Teperu Hydro-Falls as an alternative spot to Barakara Falls. She criticised the company for wrecking the environment in the name of money and said that it would be Guyana that ultimately suffered, and she vowed then to take the fight to an international level.


Disappointed
Ousman said she left the area that day disappointed in Tiwari’s conduct, but largely depressed because she was unable to convince him to change his mind about Barakara. The following day she emailed stories and pictures of what was happening at the falls to several international media agencies and later received a call from CNN in addition to calls from persons overseas who were concerned; the calls renewed her strength to press on and she continued fighting. “I didn’t hear from anyone in this country,” she recalled.


She later visited the Guyana Geology and Mines (GGMC) and requested to see a copy of an Environmental Impact Assessment (EIA) which Tiwari said was done in the area and had favoured his position. The EIA report revealed “interesting things” as she discovered that it had recommended that the company protect Barakara Falls and its immediate area from development activity. “This site represents an important tourist attraction and place of solace and relaxation for residents, locals and visitors to the area,” the report said. It also recommended that Linden Quarries, which is owned by BK International, in addition to securing the area from development “undertake intervention to enhance the site through clearing and maintenance of the trail, rehabilitation of footbridges, installation of signs, and perhaps the construction of small benabs around the vicinity of the rapid.


Ousman later found out that GGMC went into the area and had issued a cease order, and additionally, BK International gave a commitment to restore the site.
She said people needed to understand why she was concerned and determined to “put a stop” to what was happening; it was about standing up when no other person wanted to. She said if no one had opposed what BK was proposing the falls could have been history and her business would have suffered tremendously. She said the authorities need to provide an update on the situation and report on when BK International intends to restore the area.


“The site is the same and I am aware people are meeting and discussing certain things, but no one is saying anything to us and at the very least the relevant authorities need to fix a timeline when the falls would be accessible again and ensure that the company sticks to it,” Ousman said.


She said she is still amazed at how deeply involved she is in the business and how important the legacy is to her. She believes her father would have been proud of her growth, and that he is looking down at her and swelling up with even more pride because of her little victory at Barakara Falls. “He loved that Mazaruni area, he really did,” she said.