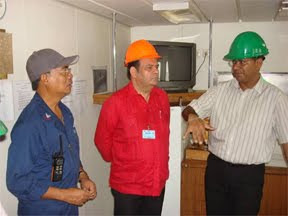 Guyana loads US$1.9m paddy for Venezuela
Posted By Stabroek staff On May 21, 2010 @ 5:48 am In Local News
With the second shipment of paddy on its way to Venezuela under a US$21.7 million deal, Guyana is expected to earn an additional US$90 for every tonne from here on.


Minister of Agriculture Robert Persaud and other officials oversaw the loading of the second shipment yesterday. MV Levante, which was expected to leave last night, is transporting approximately 4,400 tonnes of paddy worth about US$1.9 million. Guyana will also be earning an additional US$140 per tonne whenever rice is shipped


The multi–million-dollar rice purchase contract for the supply of 40,000 tonnes paddy and 10,000 tonnes rice was inked on October 21 last year. The contract, when it was first signed was worth US$18.8 million. It was expected to bring in prices of US$330 and US$560 for a tonne of paddy and rice, respectively. These prices were higher than export prices at the time.


The deal was signed in the presence of Persaud, Head of the Corporation of Supplies and Services (CASA) of Venezuela, Colonel Rudolpho Marco Torres, Guyana Rice Development Board (GRDB) General Manager Jagnarine Singh and other officials of the GRDB. The first shipment of approximately 5,000 tonnes paddy set sail for Venezuela late last December, weeks after it was supposed to leave. Exports were expected to be completed during early February.


However, late February Singh announced that the contract was being revised owing to issues encountered during the first shipment. Shortly after, it was revealed that there was a rise in the value of the contract from US$18.8 million to US$21.7 million.


“This effort by the government to assist the millers in their quest for new and more lucrative markets,” the Agriculture Minister wrote, “is in keeping with government policies to ensure the sustainability of rice production.”


Persaud further wrote: “This is an area that was in the hand of the private sector and we would have seen that it was the ‘bottle-neck’ in the rice production and marketing process.


With only a few buyers for rice to the EU and Caricom markets we would have seen a constant decrease in the price for rice.”


The Venezuelan market, according to Persaud, has helped “to stimulate the upward trend” for the purchase of paddy from farmers. Meanwhile, to ensure that farmers benefit from the increased price being paid by Venezuela, millers have been asked to pay accordingly for paddy.


More than 10,000 acres of rice have been damaged by paddy bugs. However, rice officials have since stated that the paddy bug scourge is under control and did not have a significant impact on the industry’s yield for the first crop this year.


“We will have enough rice to supply our markets,” a rice official assured this newspaper late yesterday afternoon. “And we will definitely have enough to keep supplying Venezuela under the deal.”